Welcome Annabelle Bryant with her new book Duke of Darkness! 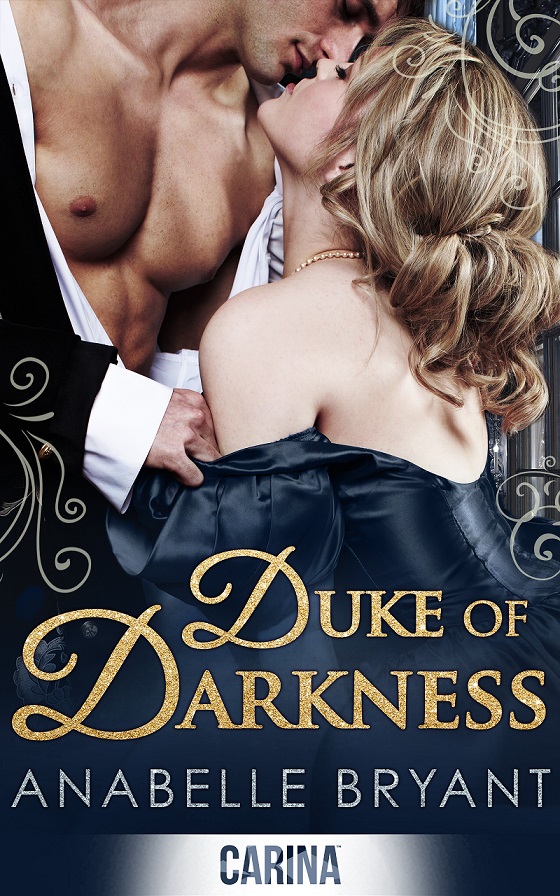 Duke of Darkness
Rumors of insanity taint his past…undeniable passion dictates his future. Is the temptation of true love strong enough to obliterate the darkness?

Devlin Ravensdale, Duke of Wharncliffe, has created an existence void of society. Content in his solitude, Wharncliffe is hardly prepared for the responsibility of a ward…especially not a woman as breathtakingly beautiful as Alexandra Grantchester. Despite his best intentions, Alexandra’s wit and intelligence destroy his stronghold on seclusion, while the temptation of her kiss haunts his every thought.

But is the lady hiding a secret of her own. Alexandra shuns marriage the same way the Duke deflects social obligation. Still an undeniable force pulls them together in a tumultuous future of confrontation and disbelief until true love leads them to find their happily-ever-after.

Excerpt:
Alexandra floated to the mirror to check her reflection. She pinched her cheeks with trembling fingers and attempted a hopeless sweep of the comb through her hair. Good lord, he struck a handsome profile in the golden moonlight. What was she thinking, inviting him to her bedchamber with the promise of a kiss? The truth whispered through her mind. She loved him. Her heart pounded in applause of the realization, but she shook away her excitement as a knock sounded on the door.
He must have run. His midnight-black hair fell tousled over his brow, and without a cravat, his collar hung open to reveal an ample glimpse of bronzed skin. She stepped away and he advanced inside. His left hand pushed the door closed as his right reached for her, snatching her against his length in an urgent rush of passion and heat. His eyes caught hers and held; the raw need in their velvet depths vibrated to her core. His head dipped, the smallest degree, but the intensity in his eyes did not waver and she saw a glimpse of vulnerability under his veil of desire, as if he sought and found whatever he searched for in that one timeless moment. She tangled her arms around his neck and brought her body closer to obliterate the last breath of air that dared separate them.
Then he kissed her. He had spoken of kisses and she’d dreamed of his touch, but nothing had prepared her for the silken heat of Devlin’s lips. He took her mouth with wild sensuality and she gave from her heart in passionate return. He tasted indescribably male, spicy and wicked; of desire and wanting and the promise of exquisite secrets found within his embrace.