Something to make you laugh…

Friday is the big day for Billie Jones! (AKA me!) Snake Typhoon! will be unleashed on the world, in eBook form, not snake form…I hope. The price has been dropped to 99 cents, so please feel free to pre-order… 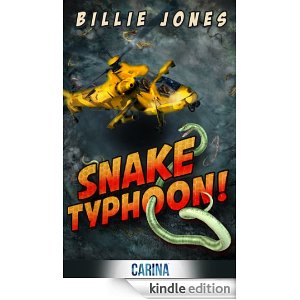 The gossip is impossible to believe, but I pack my backpack and ready myself to head to the airport. My office had been abuzz with the news of some kind of freak storm heading towards the Northern Territory and, wait for it, raining snakes. So far there was no footage, and no one really believed it, but when a call came in from someone high up in a secret government department, my boss’s mouth pinched tight like he was sucking lemons and, finally, I got the nod. I’m new to the team, in an office full of zoologists all vying for the top spot. I hope I can prove I’ve got the nous to head a mission, even one as crazy as this purportedly is. At least they’re taking it seriously enough that I’m going to fly in a chopper from Brisbane to the Red Centre. The snakes wanted to see Uluru, apparently.

Fresh out of university, and labelled the ‘new girl’, a few months in the field and I’m still the lackey. Getting flung from one snake-containment disaster to the next, to bring the crew coffee.  It’s not fair, but I don’t complain. Let’s face it, it’s only a matter of time until someone picks up a snake the wrong way, and I’ll move up the hierarchy. Between us, I hope it’s Cindii, who started a day before me, which somehow translates to her flicking her glossy too-blonde hair in my face and acting superior. I mean, she started a mere twelve hours before me. And, to be honest, anyone who spells their name with two i’s like some kind of Barbie doll shouldn’t be handling snakes and cane toads, anyway. She might break a nail, or ruin the blood-red varnish she insists on wearing. She’s like Ranger Stacey on Botox.

I suit the job description much better. Long brown hair, always tied back in a ponytail for safety reasons, khaki shirt and shorts ‒ regulation length, steel-capped boots, a smothering of sunscreen, and super-fit physique. Just as the manual stipulates. Cindii wears tight shorts and a teeny tiny singlet which leaves her well open to being the most likely to get bitten. She can’t run, or pivot, without hoiking the shorts from whichever crevice they creep in to, and in the heat of the moment when it’s us against snake, you simply don’t have time for shorts hoiking. You just don’t.