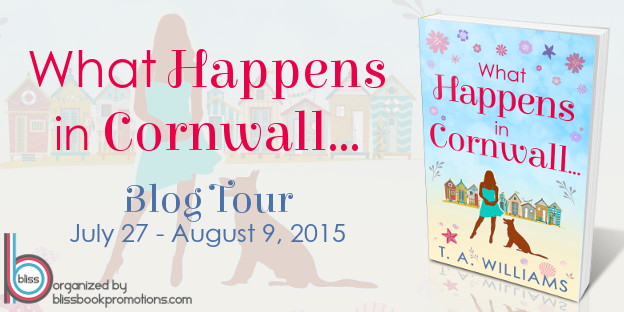 I’ve got Trevor Williams on the blog today and he’s sharing why he chose Cornwall as the setting for his most recent release! Be sure to enter the giveaway at the end also!

I live in Devon, only an hour’s drive from Cornwall. For those of you not so strong on British geography, Devon and Cornwall make up the pointy bit that sticks out of the bottom left hand corner of England. As a boy, we took family holidays in Cornwall. The rock pools, the amazing sandy beaches and, of course, the sea where I gained the love of surfing that has stayed with me all my life, were soon part of my DNA. Before getting married, my future wife and I had an unforgettable holiday in a caravan on a windswept Cornish cliff top, along with my brother, his wife and their newborn baby. Oh yes, and Tuppence, the permanently wet dog. Not the dog’s fault; it just rained and rained and rained, and we were cleaning sand out of ourselves for weeks afterwards. As preparation for married life, it was exceptional. After an experience like that, most other marital problems pale into insignificance. That may well be one of the reasons why we are celebrating 40 years of marriage this summer.

When the Romans and then the Saxons came to conquer Britain, they took the shortest route from mainland Europe. They arrived in the south east corner of England and then started to fight their way upwards and outwards. When they hit inhospitable terrain and pugnacious fighters, they stopped. That’s why Scotland, Wales and Cornwall have remained Celtic strongholds. Cornwall is different. You can’t miss that, from the moment you cross the border. Suddenly, the roads become much, and I mean much, narrower. The countryside is a picturesque mixture of wild, open moorland and patchwork fields. The north coast is very rugged, with vicious granite cliffs framing spectacular sandy beaches. The south coast, where What Happens in Cornwall… is set, is less wild, but made up of a never-ending succession of little coves, bays, beaches and harbours. Little wonder it was the realm of smugglers and pirates for centuries.

The book is set on an island. Rock Island doesn’t exist in real life. It’s a composite of St Michael’s Mount in Cornwall, Burgh Island and Lundy Island in Devon, Mont St Michel in France and a lot of imagination. The cliffs are daunting, the old abbey breathtaking, the views spectacular and the colony of seabirds deafening. The village of Tregossick is similarly invented, but it draws heavily on some of the little coastal villages along the south Cornish coast between Plymouth and St Austell. There’s an old saying, “by Tre, Pol and Pen, you shall know the Cornish men,” and it’s a fact that those prefixes appear on many, many place names. They are part of the old Cornish language, which is Celtic in origin and a close relative of Welsh. In fact, my own name, Trevor, demonstrates that common root.

But, above all, it’s the beauty of the county that attracted me, as it has done to other writers over the years. And the recent success of the TV series of Poldark is further proof of that. Although only a couple of hundred miles from London, Cornwall feels like another land. Sit on a Cornish beach on a sunny day, with your feet in a crystal clear pool and look around you. You’ll see palm trees in the gardens, a jumble of stone-built cottages clinging to the cliff side, lobster pots on the harbour side, surefers bobbing about in the waves and boats of all shapes and sizes dotted all over the place. Oh yes, and a heap of tourists eating clotted cream ice creams, doing their best to make sure the seagulls don’t steal them.

About WHAT HAPPENS IN CORNWALL: 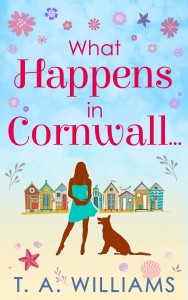 For a very British summer holiday…

When archaeologist Sam realises her relationship is as dead as the skeletons she’s exhuming, she knows it’s time to make a change. But with bills to pay her options are limited…until a discovery on Rock Island in Cornwall gives her a reason to escape…

Head to the Cornish coast!

In Cornwall, questions are thrown up at every turn: who is the glamorous owner of Rock Island that the paparazzi are so interested in? How has the irresistible, but impossibly arrogant, history professor James Courtney managed to get so far under Sam’s skin? And will it ever stop raining so Sam can lose the cagoule and sip a cool drink in the sun? One thing’s for sure: there’s never been a holiday quite like this one!

Enjoy a summer of surprises and romance with What Happens in Cornwall…, the perfect retreat for fans of Fern Britton. 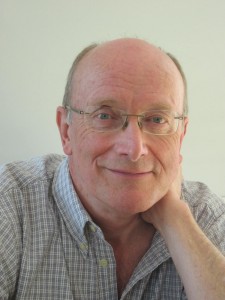 Firstly, my name isn’t T A. It’s Trevor. I write under the androgynous name T A Williams because 65% of books are read by women. In my first book, “Dirty Minds” one of the (female) characters suggests the imbalance is due to the fact that men spend too much time getting drunk and watching football. I couldn’t possibly comment. Ask my wife…

I’ve written all sorts: thrillers, historical novels, short stories and now I’m enjoying myself hugely writing humour and romance. Romantic comedies are what we all need from time to time. Life isn’t always very fair. It isn’t always a lot of fun, but when it is, we need to embrace it. If my books can put a smile on your face and maybe give your heartstrings a tug, then I know I’ve done my job.

I‘ve lived all over Europe, but now I live in a little village in sleepy Devon, tucked away in south west England. I love the place. That’s why you’ll find leafy lanes and thatched cottages in most of my books. Oh, yes, and a black Labrador.

I’ve been writing since I was 14 and that is half a century ago. However, underneath this bald, wrinkly exterior, there beats the heart of a youngster. My wife is convinced I will never grow up. I hope she’s right.